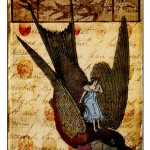 Melissa Hill is a wife, mother and reader from Indiana. She began working on the “Melissa Lenormand Tarot” in 2009, as a way to better understand the Lenormand cards and meanings. As she posted her work on the Internet, interest grew, with the end result being a Limited Edition deck of 36 cards, with a first printing of 250 decks.

Inspired by the French Lenormand cartomancy cards, this deck is done in what the author terms “vintage ephemera”, using predominately public domain vintage post cards and elements from vintage advertising.

There is so much that I love about this deck! The antique sepia coloring, the vintage dress, the whimsical nature of the cards – it all comes together in a lovely manner that, at 2 ½” by 3 ½”, sits nicely in smaller hands.

The deck comes with a signed and numbered card, 36 basic cards, 7 alternate cards and a 36 page LWB (Little White Book). There was also a lovely little white bag included, which held a Tarot Tile necklace with the female image from the Melissa Lenormand card on it. The box has a greenish background, with an image of the Melissa Lenormand card on the back, and an image of Man on the front. (Melissa also included one of her business cards – which is one of the most well thought out cards I have ever seen.)

The images on the cards are presented in a lovely layered manner – often with antique script in the background, with images layered over it. The cards are as follows:

The LWB starts out with a short discussion of Marie Anne Adelaide Lenormand, a famous fortune teller who read the cards for Napoleon and Josephine. The 36 card deck that she purportedly used became known as the Petit Lenormand. Melissa goes on to say that there are various schools of reading for the Lenormand system, some of which offer specific meaning, defined by the combination of cards drawn. Others offer specific meanings relating to the position of certain cards in certain spreads.

Melissa set these systems aside, realizing that for her it was more useful to derive meaning from the symbols, and intuitively defining how those images related to the situation she was reading about. Along this same line, Melissa notes that she does not present guided spreads in her LWB. The spreads that she presents are open – two and three card readings, and the ML Relationship spread.

In learning to read with this deck, Melissa suggests that you spend time examining the pictures, working with the layered artwork, and how it makes you feel. She also notes that there are Internet sources that will help the reader learn the different systems that can be applied to reading with these cards.

The card backs are reversible, and show a gray pattern. The card faces show a ¼” white border surrounding the picture. The name of the card is in the lower left hand corner, in black script. Three of my favorite cards are Ring, Bird, and House. Ring is based on an old advertisement for diamond rings. Bird is fascinating – it shows a text (as in an old letter) background, with a large, dark bird in flight superimposed over it. Standing on the bird is a young female figure, dressed in blue. House to me is a very erie card. In the background we see multi-story buildings. In the foreground we see a house, with a single dark tree behind it. On a branch of he tree, overlooking the house, we see a dark bird that appears to be looking down into the house.

Home life, family, relationships, special places, ties to the past, ties to this world.

The little cottage in the foreground of the House card is from a vintage greeting card. It may look lovely and provincial, bunt in the background you see the outline of city buildings – reminding us that a “house” can take on many forms. The bluebird show that wherever we find the most happiness in this world – that is our home.”
The deck can be purchased here – http://shop.tarotbymelissa.com/.