The Secret of the Tarot – 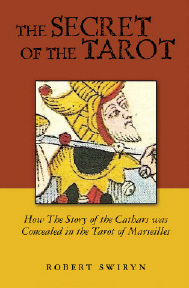 The history of the Tarot is quite an interesting one, and one that is often traced by the imagery in the cards. In “The Secret of the Tarot”, Swiryn attempts to show that somewhere along the line the Marseilles Tarot (a specific style of Tarot that has its roots in early Italian decks) may have come to carry the story of the Cathars, a thirteenth century sect of religious heretics.

In his preface, Swiryn notes that in his opinion, the Marseilles Tarot carries what he terms a classical look, as opposed to more modern decks, which he feels have drifted away from historical authenticity. In his personal studies on medieval history, Swiryn began to recognize connections between historical characters and events of this time period and the images in the Tarot cards. He goes on to say that he feels that both the story of the Cathars, and their spiritual message, seemed to have found a place in the cards. The thesis he formed was that a person, or group of people, found a way to use the Tarot of Marseilles as an instructional vehicle to preserve the story of the Cathar persecution by the Roman Catholic Church and the King of France.

What Swiryn presents here is the story of the Cathars (a look at the Albigensian Crusade, the subsequent Inquisition and the fate of the Cathars), and the supposition that this story is concealed within the Marseilles Tarot imagery. The book is in two parts: the first part covers the history of the Cathars through the lens of the Roman Catholic church, the medieval Languedoc and the Counts of Toulouse, the Cathars themselves, the Albigensian Crusade and the development of the Tarot. The second part covers the twenty-two Major Arcana of the Tarot, and attempts to look at what the creators of the Marseilles Tarot had in mind when they designed their cards. Through the lens of historical context, Swiryn attempts to show the connection between the spiritual beliefs of the Cathars and  the imagery in the deck.

A great deal of research has gone into this book. People familiar with the Tarot world will recognize names like Robert O’Neill, Stuart Kaplan, Michael Dummett, Paul Huson, and Alfred Douglas. The specific Marseilles Tarot that is used throughout this book is the Nicholas Conver deck. Other illustrations are used to show the symbols and imagery used during this time period, such as a stained glass of the Virgin Mary in Majesty from Notre Dame de Chartres, the bell tower at St. Sernin, and the martyrdom of St. Sernin. These are all reflective of the times that the Cathars lived in.

Would it have been possible for the story of the Cathars to be imbedded in the Marseilles Tarot? On the surface, yes. Cathars could have worked amongst the artisans that cut the wood blocks for the Tarot cards. Probable – no. And if the story of the Cathars was embedded in the cards, it may have been done after their time, by someone else, to simply keep their story alive.

In Part 2, where the cards are presented, the connections that Swiryn makes between the Cathars and the Marseilles Tarot images are, in my opinion, tenuous at best. Tenuous, but worth considering. In the Lovers he attempts to make the case that the imagery was significantly altered from older decks to give it new meaning.

For example, Swiryn surmises that just as the two figures Lovers card in the Visconti-Sforza Tarot are generally accepted to represent the two families, the three figures in  the Lovers card of the Marseilles Tarot may point to historical  figures within the Albigensian story. He posits that the third figure may represent  the French Regent (Blanche of Castille), intervening between Raymond VII (the middle figure) and Beatrice (the younger woman on the right). Another theory presented here is that the Marseilles version of the Lovers was sometimes referred to as the Two Paths, with the figure on the left representing the institutional church, and the figure on the right representing Love.

There are many other instances of information that is offered from a slightly different viewpoint than is generally considered. At the least it is interesting, including the thought that if Cathar history has been encoded in the Marseilles Tarot, that it was done hundreds of years after the demise of the Cathars, perhaps by Cathar sympathizers that were involved in the printing of the decks.

“The Secret of the Tarot” is written on a level that makes it readily understood by all levels of Tarot student. Between the footnotes and the bibliography, it is easy to see where Swiryn is referencing his material, so that anyone interested in following up with studies of their own may do so. There is one minor glitch, in that Robert O’Neil’s e-book “Catharisn and the Tarot” was inadvertently left out of the bibliography, but it is acknowledged in Swiryn’s footnotes.

For anyone interested in the history of the Cathars, in the Marseilles Tarot, or in Tarot history, this is a book that I would recommend. The ideas presented here may not be universally accepted, but they do offer food for thought.