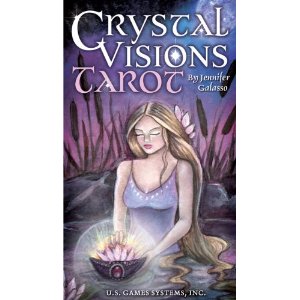 “Crystal Visions Tarot” is brought to us by fantasy artist Jennifer Galasso. The beautiful, soft artwork bring to mind another of my favorite decks, the “Shadowscapes Tarot”, by Stephanie Pui Mun Law. I love the colors and sense of grace in this deck. The intention with this deck was to create art that was unique, but that would be close enough to traditional imagery to allow new readers to learn the Tarot easily.

The name for this deck was inspired by the Stevie Nicks CD “Crystal Visions”. Galasso also attributes her interest in the spiritual realm to Stevie’s haunting voice, ethereal nature, and poetic lyrics. Her interest in crystal balls is also evident in the deck’s imagery. While not intended by the artist, I have to agree with a comment in the introduction that some of the imagery in this deck does bring to mind the faerie realm.

This is a traditional 78 card deck. The traditional names are kept for the Major Arcana, with Strength at VIII, and Justice at XI. The suits are Wands, Cups, Swords, and Pentacles. The Court Cards are entitled King, Queen, Knight, and Page. There is one additional card in the Major Arcana, entitled the Unknown Card. It represents an answer that is not yet ready to be revealed. I love decks with an extra card like this – we can all identify with Kat Black’s Happy Squirrel in the “Touchstone Tarot”, and who doesn’t adore the Artist in Monica Clio Sakki’s “Sakki Sakki Tarot”! The Unknown Card can refer to something from the past, or something that is going to happen in the future. The area that this card falls in indicates where steps need to be taken to clarify the big picture. There is also a hint to move forward with an open mind, leaving all bias behind. I loved this card before I even knew what it represented – my thought was “Yes! Another deck with a card that is “gifted”!”

The LWB (Little White Book) that accompanies this deck gives a short introduction, then presents each card, text only. The energy of the card is discussed, with upright and reversed meanings. At the end of the LWB the layout for the Celtic Cross is given – meanings only, no sample reading. This is followed by several blank pages to take notes on.

The cards are 2 3/4” by 4 3/4”, with a slick card stock. The backs have a 1/4” white border, surrounding a gorgeous center done I shades of lavender, with roses and vines in the four corners, and a round globe in the center, surrounded by vines and roses. In the middle of the top and the bottom is an upright chalice. The backs are reversible.

The card faces show the same 1/4” white border, with the card title in across the bottom, with the background color indicating the suit: the Major Arcana is yellow, Wands are light red, Cups are pink, Swords are blue, and Pentacles are gray. The artwork is done in a fantasy style, using reds, greens, lavender, and dark brown predominately. There is a sense of gentleness and “otherworldliness” that draws one in, and makes one feel right at home.

This is one deck that if I had my way, I would talk about each and every card! However, that is not allowed, so we will look at the cards that pulled me in the strongest. One of my birth cards is the Hermit, so that is one card that I look at in every deck. If there was a make or break card for me, this would be it. Here we see a lone figure, in a lavender robe, sitting atop a mountain, with a lamp in their left hand. They face the right hand side of the card, generally considered to represent the future. To me, they appear very wistful.

The Empress stands in the middle of a garden, wearing a bright red dress, and carrying a triskele scepter in her right hand. She holds a heart shaoed charm. Lush greenery is behind her, as well as a tree with bright green foliage and ripe red fruit. In the upper right hand corner of the card we see beautiful butterfly’s.

The Lover’s shows a man and a woman embracing, with flowers in the right and left hand lower corners. The figures are bound by ties held by two doves,

The Unknown Card is an “extra” card added tot his deck to represent that which we are not ready to know yet. What an incredible card, with the female figure holding a crystal ball in her left hand, wIn her right hand is ith lit candles on her upper right hand side and lower left hand side. In front of her we see the shadow of an owl. Her whole body posture invites the Seeker to peer into the crystal ball!

The Queen of Cups is shown seated on a rock, surrounded by water lilies and dragonflies, wearing a lavender gown. In her left hand she holds a cup, in her right hand a trident staff.

The Ten of Swords in this deck is one of the least scary, but saddest, images of this card that I have seen in any deck. A female figure is face down in the snow, bloody, with ten swords in her back. She is surrounded by snow and barren trees. The clouds in the sky behind her are attempting to part, indicating that there is hope.

The Eight of Pentacles shows a female figure, standing at her spinning wheel, paying ardent attention to her work. I like this card because she is working outside, with greenery surrounding her and a tree behind her.

The Knight of Wands is seated on his horse, which is rearing up, indicating action. In his right hand is what appears to be a lit torch.

The Fool in this deck just carries incredible energy! The figure is a female, with dark, flowing hair. She stands on a precipice, one foot on land and one in the air. There is a trail of butterfly’s in the air to her right.

I found this deck very easy to read with, and feel that it would be a great deck to offer clients as a choice for their readings. The art alone is gorgeous, and the additional card (the Unknown Card) to me opens up new avenues for reading. It could simply be taken out of the deck if the reader preferred not to use it. 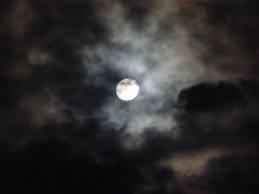 Hmmm What does a Full Moon in Taurus bring us? This is a time to remember that not all things are as they seem. We need to develop an appreciation for who we are, for our “authentic self”. If we are not reflecting our authentic self in our day to day life, then we need to take a look at that. One way to ground and center is through how we express our spirituality.

Along with the Full Moon in Taurus, we have the Sun in the sign of Scorpio. Here we see the extremes in emotions (including that little Scorpio stinger!), along with a sense of depth and intimacy. This is a time when we want to get to the truth of things, to “out” all things secret. BTW – Scorpio has a strong will to go along with their (mostly quiet) intensity! All things superficial are out! Scorpio energy can be healing and transformative if positively aspected. If negatively aspected – watch out! Jealousy reigns supreme!

Put together, Taurus brings us patience, while Scorpio gifts us with an astute sense of timing. It will be easy at this time to create calm within the chaos, and to ground and center yourself. This carries importance, as the Taurus Moon/Scorpio Sun can bring with it an internal power struggle, especially relating to material things. Dealing with current or old relationships may be called for, but this is not a good time to begin a new relationship.

Things we may want to look at on this Full Moon:

1. What am I not seeing in my life?
2. How do I feel about power? Do I use it wisely?
3. What am I basing my goals on? Do I need to re-evaluate, release the things that no longer serve me well, and reset my goals?
4. Is trying to achieve my goals costing me more than it is worth?
5. What do I need to take the time to reflect on this Full Moon? 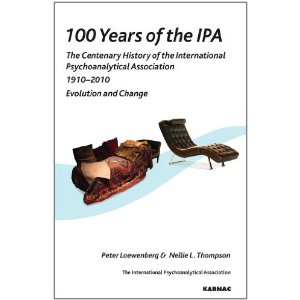 In his foreword, current IPA President Charles Hanly notes that the year 2010 marks the 100 year anniversary of the International Psychoanalytical Association (IPA). The beginnings of the IPA were at the Founding Congress in Nuremberg in March of 1910. As small as this council was, it included such luminaries as Freud, Ferenczi, Abraham, and Eitingon. While the IPA was founded by men, yet women gained recognition, institutional equality, and governance roles in the psychoanalytical field before they were able achieve comparable status in other scientific fields. Hanly regards the IPA as a unique organization that advances its field of knowledge and practice by means of congresses. In addition, the IPA maintains minimal ethical, training, and professional standards, and creates new study groups, provisional societies, and component societies throughout the world. It also certifies psychoanalysts worldwide according to the highest standards of training and practice in the field.

This work is a four year collective effort on the history of the IPA, with 56 contributors, in 41 countries and societies. Included are essays by the six living past IPA presidents (and by the late past president Leo Rangell). Each contributor speaks of both the accomplishments and the shortcomings of their administrations.

The book is divided by geographical area: Europe, North America, Latin America, Asia and Oceana. Each geographical area is then sub-divided into countries. Each contributor has written a synopsis of how the IPA developed in their country, including the individuals involved, the names of the presidents, and the issues that were faced, which included religious and cultural bias, national bias, political bias, and individual “ego clashes”. In several instances the IPA was either shut down, and then later re-instituted, or groups splintered off from an existing group.

Reading this material takes one back in time, as if they were reliving the times of Freud and Jung, their contemporaries, and those that followed them. I found this to be a fascinating book, and a must have reference for anyone in the psychoanalytical field, or anyone interested in it.