The Easiest Way to

Learn the Tarot – EVER!! 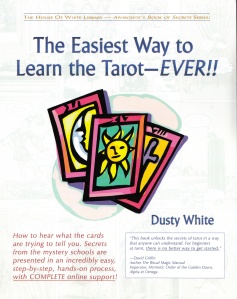 This is, at heart, a 324 page workbook for learning the Tarot. (And yes, I do differentiate between a workbook and a book that aims to present material in a more textual manner.) I have several quibbles with the presentation of this book, beginning with the use of clip art on the front and back pages. This might be fine in some instances, but the manner it is used in here makes me think that the author takes a very cavalier attitude toward Tarot, and towards teaching the Tarot. There is an online site that acts to give 24/7 assistance in any problems that a student may have through the use of its forums. The site provides information on the book itself, a Tarot community with help, instruction, news, forums, and guest lectures by Tarot experts. The aim is to provide a system of education that combines self-teaching, individual tutoring, and community support. This is a very nice concept, and it may work well (I don’t know, because I did not choose to join the site), but there is extensive use of clip art, which really turns me off.

There is a front-sheet for the reader/student to place their name, the date that they started working with the book, and the name of their instructor. This is a good thought, IMHO, because it creates a connection between the reader/student and the work they are doing.

In his introduction, White states that he feels the images in the Tarot come from a time that is long since past in societal evolution, that they reflect political structures that are different from those of modern times. He then goes on to say that the Tarot is still a highly useful “study guide” for personal advancement along metaphysical lines, and a “nifty” tool for predicting future events. The core of this book is in answering the following questions about the Tarot: “What does it mean?”, and “How Does It Work?”

The Major and Minor arcana are referred to as the two “camps”, with the Major Arcana being the “spooky cards”, and the Minor Arcana looking suspiciously like a “normal” deck of playing cards, with an added face card. The exercises in this book are meant to help the reader/student understand the Tarot, and create a good working relationship with their chosen deck. The reader/student is advised to leave the “esoteric stuff” alone until they have developed a thorough understanding of their cards.

In “Section One – Getting Started”, the necessary tools are listed: this book, a deck of Tarot cards, and a notepad or journal. The decks that are recommended are any of the “Waite” decks by U.S. Games. Yes, this is my second quibble with this book. To recommend a deck for a beginner to use is one thing, to recommend a publisher is an entirely different matter. I highly respect U.S. Games, and the line of decks that they offer, but other publishing houses also offer Waite or Waite “clone” decks. The “Halloween Tarot” somehow also made it onto the recommended list, while the Marseilles decks are pushed aside as leaving a lot to be desired – they are “nice to show off at parties”, but a quick “down and dirty” reading is better done, in the author’s opinion, with a Waite deck.

The first table that is presented is actually one that I feel is a good foundation for doing readings, as it lists the four suits, with their corresponding direction, season, and element. The Minor arcana are defined as “making sense”, and providing the details needed for interpretation. The Major arcana are defined as a set of symbols of elements of existence or society, with the notation that they contain psychological correspondences. White notes that the Major arcana are too “vague” for daily use without the help of the Minor arcana to clarify them.

As a workbook, the material is structured for use in 30, 60, and 90 day increments. It is suggested for the first 30 days that the book be read in its entirety, and that the exercises be done in order of presentation. Once the reader/student is comfortable with each exercise, they are encouraged to work with simple spreads as often as possible.

Section Two includes a 30 Day Checklist noting each exercise and the skill level of the reader/student, a chart with room to list what the reader/student learned on each day. The first exercises offered have to do with getting to know the cards, both at “face value”, and “beyond face value”, which moves into the imagery on the cards. Another quibble here – the black and white scans used to illustrate the exercises are placed at artsy angles, which does nothing but irritate me. (Note: The deck used for illustrations is the Waite Tarot – what I would normally refer to as the Rider-Waite Tarot.) Exercises two through four are basically two card comparisons, with exercises five and six working with three cards. Exercise seven works with opening up a card, while exercise eight blending the meanings for two cards into a central meaning. Exercise nine talks about blending the meanings for multiple cards into a central meaning, with exercise ten turning multiple cards into a story. Exercise eleven, which is optional, has the reader/student taping an older deck to the wall (on the order of a multiplication table). The extra-credit exercises are actually interesting – they are two and three card practice spreads with a list of questions to be answered. There is a list of “really advanced exercises” that have to do with moving the cards around, which I really did think was fun and educational. The reader/student is requested at the beginning of Section Two to “toss aside” the Major arcana until a later time.

Section Three discusses one through three and multiple card spreads (including the Celtic Cross, Astrological and timing spreads). In “fun things to do with your Tarot deck”, White talks about putting captions on the cards. Does this open up how the reader/student views the card? Yes, it does. It’s also fun. As a writer I choose to do this through story, though, rather than putting captions on my cards.

Section Six includes instructions for the first 30 days of working with this workbook, as well as instruction to visit www.AdvancedTarotSecrets.com for help and further information.

Appendix A deals with troubleshooting basic problems, Appendix B is a Tarot FAQ (listing of Frequently Asked Questions), Appendix C is a brief history of the Tarot, Appendix D talks about how to be a hit at parties, Appendix E talks about party games, Appendix F Secret Societies and Mystery Schools that the reader/student may wish to join, while Appendix G is a recommended reading list. At the very end of the book is a glossary.

This workbook presents a good system for getting to know the Tarot, and for reading with it. The buyer beware caveat here is that the author’s style is very breezy, which will not appeal to all people. I was interested to see that there was an associated site, which is there to support the book, but I don’t know how well the site functions, as I did not join it. This is definitely a workbook where I would say “Take what you will, and leave the rest behind.”

9 comments on “The Easiest Way to Learn the Tarot – EVER!!”