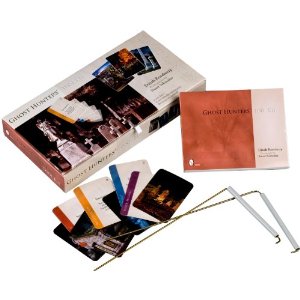 (A note before I begin this review, in honor of transparency. I am an author with Schiffer Publishing, and Dinah Roseberry is my editor. If that is a problem for you, you might want to stop right here and read someone else’s review.)

Dinah Roseberry, aside from being an editor for Schiffer Publishing, is a affiliated with the Chester County Paranormal research Society, and has been a part of paranormal investigations with this and other teams. Stuart Schneider is a successful cemetery photographer and author. Together they have created a kit that is visually appealing, content rich, and a powerful tool for paranormal investigators.

The kit comes packaged in a sturdy 11 ¾” by 6” box, with the trademark Schiffer magnetic close lid. Included in the kit are four decks, a 158 page user’s manual, and a set of dowsing rods. I did have to play with the dowsing rods! Easy to use, they give clear yes/no responses. The manner in which they moved was not that described in the manual, by Roseberry had noted that this sometimes happened. What I did note is that from day to day the responses remained the same for yes and for no.

I was thrilled to see that the book was dedicated to my friend Carolyn Giles – a lady that I met in an online Tarot forum, and subsequently met at a Readers’ Studio, and someone that I have a very high regard for.

Roseberry begins the user’s manual with an explanation of where the need lies for this type of material within the paranormal investigation community. It is the old story that we Tarot people know well … “scientific inquiry” versus “divination”. Strangely enough, the oracle cards fit right in with the other investigative tools, giving those performing the investigation another avenue to bring information through. Remember – with a paranormal investigation we are working with spirit-oriented activity in the physical world.

Roseberry learned to read the Tarot herself some years ago, and does do readings for other people. It was not such a stretch that she made the decision to use the Major Arcana of the Tarot (the first 22 cards in the deck, which are considered to have archetypal energy) as the basis for the oracle cards in this kit. She developed the other three oracle decks that are included in this kit from the point of view of what were the important times that something like this would be valuable for a paranormal investigative team’s usage. This is what she defined:

It is suggested that to begin with, investigators use three card spreads, with what she terms “jump off” questions. She also notes that once a card is drawn, the person doing the reading my simply begin talking, without regard to the cards position within the spread. Team members have to be willing to go with the flow on this.

All four decks in this kit consist of 22 cards, and follow the template of the Tarot Major Arcana. The first deck is the Tarot, which are considered to be the “wild cards” of the paranormal kit. They can be used with any of the other three decks, creating a 44 card deck. The user’s manual includes a black and white image of the card, the card’s number and title, a keyword, short phrases, and a description of the card’s energy. The cemetery that is pictured on the card is also referenced.

For example, for the Fool we have the keywords “Starting Over”, the phrases “repeating patterns, understanding the past; lessons learned, possible journey. The cemetery view is that of The Old South Church, in Bergenfield, New Jersey.

The Paranormal Investigation Deck has instructions on how to use it, followed by each card, with a black and white image, the equivalent Tarot card, a keyword, key phrases, How this investigation will affect your team personality, and the cemetery referenced. Card 0 is equivalent to the Fool. The keywords are “Starting Over”, and the phrases are “Stay in forefront, strong views; sacrifice may need to be made”. The cemetery is Sleepy Hollow Cemetery, on Long Island, New York.

The Paranormal Client Deck has instructions on how to use it, followed by each card, with a black and white image, the equivalent Tarot card, a keyword, key phrases, Understanding the Client, and the cemetery referenced. Card 0 is equivalent to the Fool. The keywords are “Starting Over”, and the phrases are “Some clients experience skepticism, but are willing to take a leap of faith.” The cemetery is the Sleepy Hollow Cemetery, Long Island, New York.

The Paranormal Recruitment Deck has instructions on how to use it, followed by each card, with a 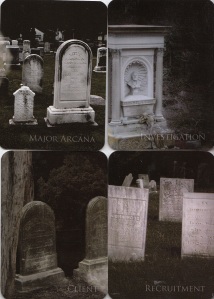 black and white image, the equivalent Tarot card, a keyword, key phrases, Interviewing a potential team member, and the cemetery referenced. Card 0 is equivalent to the Fool. The keywords are “Starting Over”, and the phrases are “Go-getter; they need specific focus or willinvolve him/herself in all aspects. The cemetery referenced is the Miner’s Cemetery, Franklin, NewJersey.

There is a chart at the end of the book that shows each cemetery, its location, the deck it is in, and the card it is associated with. This is followed by a section on dowsing, and an appendix that gives the do’s and don’ts of using this kit under “ghostly circumstances”, and other ways to use the decks.

I found this book to be informative, easy to follow, with a definite difference in focus between the

decks. (Remember, as a wild card, the Tarot deck can be added to any of the other decks for deeper information.) It is oriented towards team activity, and is a powerful tool for bringing forth information. Two thumbs up!