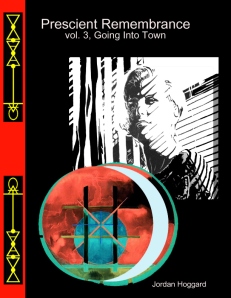 “Going Into Town” is the third volume in a proposed series of ten volumes, recounting the story of a love that was found, lost, then searched for through the centuries. This undying love made the man immortal. His story is recounted in an ancient journal that we read as the series progresses. As I said about the first two volumes … this is epic poetry!

In volume two, we discovered we meet the Priestess Brahmana … the One who will inhabit the man’s dreams. In volume three the man whose story this is goes into town, to remember … to bring back his memories, as it were.

“Rustication of a Building and Its Homeless

It is not for a faulty start

that it is falling now.

It is not for bad genes

as it got this far, falling now.

It was crafted well,

with care and attention

paid to every detail,

as cornice was given a silent rhythm

to frieze over a looming allegory of its façade.

it was never thought

that this building would fall this century.

It was never thought

would wipe the smile and weight from its many talents,

leaving it to uphold a weary, wayward, itinerant wainscot,

painfully hunched over and bleeding,

holding out cups of grief

We read that tears are warming to the soul, and see how memories freeze together in peaceful co-existence. Changing, it is at rest.

“Prescient Remembrance – Volume 3: Going Into Town”  – can be purchased here.

One comment on “Review – Prescient Remembrance – Volume 3: Going Into Town”