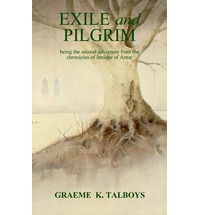 “Exile and Pilgrim” is the second adventure from the chronicles of “Jeniche of Antar” – an incredible follow-up to “Stealing Into Winter”! Introduced to us as a very accomplished thief (and an esoteric scholar), Jeniche is coming into her own in the land of Ynysvron. After a time of great chaos, Jeniche has her own room, books, and regular meals. She is starting to enjoy life – mentoring Cenau in combat, while spending most of her time studying in the library of the Great College of the Derw. She is allowed access to any materials that she wants to see, and spends her days taking notes. Her focus is on the Evanescence, and the time before the collapse.

She is very surprised when Cenau hands her a copy of a key to the tower room … a room that holds secrets that she wants to know. Is it a new key, as he claims, or has it been previously used? Is he telling her the truth, or not?

Ynysvron is an interesting land – ruled by the Nine Sisters, formidable strategists and smiths, warriors of renown. It is a land of warriors … and of scholars. Jeniche has been happy here, but she is beginning to feel the urge to move on, to experience new things.

But times are changing in Yvysvron – there is a sense of uneasiness in the air. Jeniche is helping the cartographers with their maps, as she has first hand knowledge of lands they have never seen. The Nine Sisters ask Jeniche to teach them the martial arts that she knows – an odd request, which is taken even further when Jeniche is called to a meeting in the Library, and asked to accompany a group of people that are traveling to a distant place to check out the rumor that a hoard of material of interest to the Library has been located, hidden in a cave in the far north of Bradden tribal lands. Strangely, this request comes as she was packing to leave Ynysvron.

Jeniche agrees to make this journey. It makes sense – she carries the wisdom of her travels to help guide the others, and she has expertise in pre-Evanescence objects. Little does she know that some of the people in the group are not what they seem, and that the object they are searching for is not what she thinks it is.

Nor does she realize that the caravan of players that recently came into Synysvron is so much more than it seems, and that some of these players will play an integral part in the drama that unfolds. Warriors are tested on this journey, as is Jeniche, and the powers that she carries with her (which don’t end with her sword).

This is a magical story, of magical lands and times that are as real as they can be. Everything presented is plausible, and truly expands the readers knowledge of life, and of themselves.

Talboys notes that the artwork on the front of this book (entitled “Travellers In Time”) is by artist Richard Ackerman. How appropriate an image for a book of this magnitude!

“Exile and Pilgrim” is all about worlds that might exist, and worlds that we know exist. It is about human nature, loyalty, and how civilizations protect and share their wisdom. Fast paced, with timely references to the first book in this series interwoven into it, “Exile and Pilgrim” builds nicely from its past into its present, and leaves the reader with a tiny taste of what the future might hold!

Reproduction prohibited in all venues without the written permission of the author.