RAW
One Woman’s Journey Through
Love, Loss, and Cancer 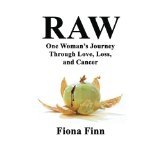 RAW is literally one woman’s journey through life … two failed marriages, three children, two divorces, bankruptcy, and being diagnosed with stage three colon cancer. She was abused during both marriages, and abandoned during her cancer treatment. She lost all sense of who she was in trying to please others. She literally became the “Barbie doll” that she had played with in her childhood.

Finn presents herself as a desperate housewife … however, if we are to accept that view, we have to update the stereotype. She does not live in an Ozzie and Harriet world … she is a college graduate, and ran a real estate business with her second husband. Appearances were/are important to her … including her children having the best of everything as soon as it hit the market.

Finn goes through a lot in life … and owns up to her part in the story, including the fact that she made her own decisions, not all of which were good ones. In telling her story, she hopes to inspire other women to find their own truth, and rebuild their lives.

This book is recommended for mature readers only, due to explicit content (sometimes quite explicit!), and adult language. While the book wanders a bit, it does show just how bad relationships of all kinds can get, and that there has to be a time when we know that we have to leave to save our own sanity … that the relationship is beyond repair.

While I found the material in this book to be valuable, I do not recommend it to those who are very sensitive to language or explicit content.

© 2000-2014 Bonnie Cehovet
Reproduction prohibited without written permission from the author.