All Because of the Tip of a Needle 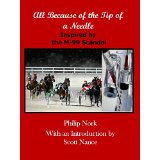 As with Nork’s previous books, “All Because of the Tip of a Needle” is more about the “character” of the characters, than about the issues they are facing. The environment for this book is harness racing – specifically harness racing in the state of Illinois. This is a fictional story, one that is based on the life story of Scott Nance, the gentleman who wrote the introduction. It is all too easy to start looking at the story as it unfolds as being a “true” story. It is a fictional story, based on the recollections of Scott Nance. That is all it is meant to be, and as such, it is compelling!

We follow the main character, Samuel Newman, from his younger years into his harness racing years. We see the influence that his grandfather has on him, not only in how to treat horses, but in how to live the best life that he can live – how to be a man of his word, a man of honor. Throughout the book Sam hears the voice of his grandfather, giving him advice on how to handle some very tricky situations.

Sam and his brother, owned, trained, and raced horses in the harness racing circuit. They built up a highly successful business, all based on integrity, and treating their animals well (including down time to heal). It all fell apart due to rumors, nuances, and the drug Etorphine (also known as M-99). Sam was brought down by a veterinarian with his own agenda, and a race authority that was corrupt. He came back, only to face the jeers of race fans every time he ran a horse – and won!

The time span of this story shows some of the changes that occurred in harness racing – including lighter surrey’s and off track betting. The story is one of a whole different world – that of racing, and how the money stayed in the high places, places where the books were not required to be open.

Sam was framed – he lost his right to race, his marriage, and much more. He came back, but in the end left the racing world in a very interesting way. You have to read the book to find out what that is! There will always be scandals like M-99, and people with their own agenda’s that will lie and cheat. I found the core values of the main character to be a reflection of the goodness in mankind, something we need to see more of.

I was very happy to see the story dedicated to the Standardbred Retirement Foundation – a non-profit organization that works for the good of non-competitive race horses. It is our responsibility to care for the animals around us.

I found this to be an enjoyable book, and think that you will too!

© 2000 – 2014 Bonnie Cehovet
Reproduction prohibited without the written consent of the author.