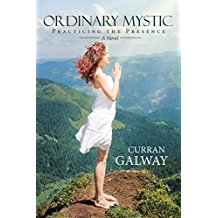 The primary character in this novel is thirty-five year old Bridget McGuire. She is in a dysfunctional marriage, tied to the day to day care of three children under the age of five. She felt invisible until she went on one of a series of retreats in the Santa Cruz mountains of California, which is where she fell in love with God.

The premise of the novel is that Bridget McGuire is an ordinary mystic, feeling the need to tell her story to others, so that she could awaken other mystics. I have a problem right here, with individuals who call themselves mystics. Yes, Bridget calls herself an ordinary mystic (i.e. someone functioning in the ordinary, physical who has mystical experiences). While this does not take away from the story itself, it does clash with my beliefs, and whoever reads this review should know this. I certainly believe in mystical experiences, I just have difficulty with people identifying as mystics.

The backbone of this story is about how Bridget struggles to integrate the extraordinary into the ordinary in her life. With not enough time in the day, she manages to start each day in meditation, reaching out to form a connection with God. She tries to carry that energy with her throughout the day.

Bridget is a stay at home mom, with a marriage that is unraveling, and a husband who has issues with alcohol. She is disconnected from her biological family, which is fairly dysfunctional stemming from issues within both of her parents. Her husband’s family is also dysfunctional, with the added issue of alcohol problems. The dysfunction within both families is what led to Bridget and her husband marrying at an early age – for both of them it was an escape from difficult home environments.

At the retreat, which Bridget returns to several times, she begins to fall in love with the priest that is doing the teaching. (Bridget and her husband were both brought up in the Catholic faith. The retreat is a Catholic retreat.) Through her discussions with this priest (Father Christian Mann), Bridget begins to see a bigger, clearer picture of life.  She finds, to her shock, that Father Mann is questioning his faith. (In his fifties, Father Mann has served the church since he was very young.)

Bridget builds a picture in her mind of forming a life with Father Mann, as she sees her life with her husband disintegrating. There are good times, and difficult times, as Bridget comes to realize that Father Mann has more issues than just the questioning of his faith.

The writing in this book is fluid, and the story flows. There are high emotions across the scale that grab the reader and hold them riveted to the story. The characters are well defined, and stay true to themselves. It is of note that this fictional story is based on Curran Galway’s true life story.

I found this book to be important because it made the lives of the characters seem real. The decisions that Bridget McGuire had to make were a logical progression of where her life was heading. I found a bit of discrepancy in some of Bridget’s actions, based on her financial foundation, but the life story held strong. Readers who have had mystical experiences, but have not come out with them for fear of being judged, will find wisdom in this book. I recommend this book for those wishing to understand mystical experiences, as well as those wishing to form a personal connection with God.