March Madness takes on a whole new meaning with Attune Magazine! The entire month of March is dedicated to raising funds to take Attune Magazine into the digital age … to place it on mobile devices such as iPads and iPhones. Founder/editor Mary Nale has consistently presented us with quality articles and reviews, video reviews, and ads for a diverse range of products and services. Her magazine reaches a wide circle of people, and will reach a wider circle with inclusion on mobile devices.

There is a listing of products and services  that have been donated as rewards here. First come, first serve! Rewards range from a 30 minute Harmony Light Reiki Session, to Your Numerology Map, to “Power Scopes” and a 15 minute Intuitive Reading, to Handmade Tarot bags, to a 30 minute reading with Maggie Lukowski, to books, including “Tarot, Birth Cards, and You”, “Tarot, Rituals, and You”, and “Seek Joy … Toss Confetti”,  buy one/get one free for a half page ad, and a beautiful Gemmy Pendulum.

There will also be a series of free classes during the month of March. Individuals in the chat room are eligible to receive free random rewards … but you have to be there to receive them! Classes include:

You can also keep up with the fundraiser on Facebook. I hope that you all come and enjoy the classes, and that you contribute whatever you can to the fundraiser. Mary has worked very hard to keep Attune Magazine and Attune Radio up and running, and if we can help her move to the next level, that is what we need to do! Come and be a part of this wonderful community!

Reproduction prohibited without written permission of the author.

“The Rune Deck”, from Mary Nale and Attune Magazine, is a 25 card deck based on the Elder Futhark (thought to be the oldest version of the Runic alphabet). The 25th card is a blank card, which some choose to read with, and some do not. I am very happy that this card was included, as I do use it myself.

There are two sizes of this deck available – bridge size and a mini-deck. The size of the cards I am reviewing is 2 ¼” by 3 ½”. The overall color scheme is brown – the backs carry a dark brown border, with a skull centered at the top of the card, against a brown background. Under the skull we see two orange and brown butterflies. Under this heading we see the Runic symbols – black on a dark brown background, with the cards set against a very light brown background. The card title is under each card. The backs are not reversible.

Accompanying the cards is a sheet giving a short explanation of the Elder Futhark followed by the Runic symbols, under which are their titles, and a specific keyword. For example, – with Fehu we see the keyword wealth, with Laguz we see the keyword water.

I did a three card Past/Present/Future reading, and drew the following Runes: Nauthiz/Thurisaz/Kenaz. Naubiz, with the keywords “need/hardship”, indicates to me that in the past there has literally been some form of hardship. Thurisaz, with the keyword “giant”, indicates that in the present there is conflict and will at work, bringing about change.  Kenaz, which represents the future, and the probable outcome, speaks of creativity, strength, and opening up to new power. I was reading for myself, and this does ring true.

The only thing that I noticed about this deck that was a bit different was the spelling of some of the Runic names. This can differ in various reference materials, so I would say that the user should work with what may be familiar to them. The titles in question are Burisaz/Thurisaz, Raibo/Raidho, Kaunaz/Kenaz, Perb/Perthro, Sowulo/Sowilo, Teiwaz/Tiwaz, Berkana/Berkano, Inguz/Ingwaz, Opila/Othala.

I have several sets of Runes, in everything from wood to rose quartz crystals. I enjoy working with them, and find these cards to be a lovely inclusion.

Reproduction prohibited without the written permission of the author.

I just received the Purple Lenormand, a new 36 card deck from Mary Nale of Attune Magazine. I don’t generally read with the Lenormand, but I do find this deck to be interesting. It is, as the name implies, done in purple, which is a favorite color of mine … a very relaxing, serene color. 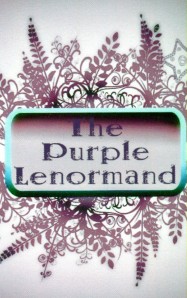 This is meant to be a whimsical deck, and it is. Be aware that the imagery from this deck reflects life, which means that there are a full gamut of emotions expressed, some of which might be considered to be on the dark side. In the discussion of the cards below, the meanings of the cards were taken from this site: http://learnlenormand.com/petit-lenormand-card-meanings/.

Card number 3 shows a ship with masts, sailing on the ocean. The feeling here is a gentle one. Modern meanings include travel, putting all of your eggs in one basket, or the start of an enterprise. 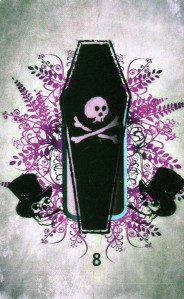 Card number 8 shows a black coffin in the middle of the page, with black skulls, wearing top hats, on either side of the coffin. Sounds macabre, but it really is cute! Modern meanings include sickness, need of rest, or a visit to a hospital.

Card number 10 shows the Grim Reaper, holding a scythe in front of him. Modern meanings include the sudden end of something, which can be determined by the surrounding cards.

Card number 11 shows a short yellow broom, with a hand in front of it wielding a whip. Modern meanings include negotiations, clearing the air, and addressing issues as they crop up. On the flip side, we are looking at anger, arguments, and beating yourself up.

I found this deck easy to read with … it could be used as a stand-alone oracle, or read in conjunction with the Tarot or some other oracle.  It is a beautiful deck, and a nice addition to the Lenormand tradition!

Reproduction prohibited without written permission from the author.

A Deck For Channeling

“Messages – A Deck For Channeling” is a 36 card deck that is intended to be used as visual cues for channeling. There are no borders, names, or numbers to distract the user from connecting with the images. The images themselves are taken from the author’s own personal photographs, as well as from public domain photographs.

The cards are 2.25” by 3.5”. The backs show a collage type background of purple, black, and white, with the deck name in the center, against a black background. The backs are not reversible. The card faces are layers of images that present some astounding effects … every time you look at a card you see and feel something different.

The cards come in a hard plastic case, accompanied by a short booklet that presents the intent of the deck. In the booklet, the Mary notes that the deck is not for everyone … that it can be a bit “moody”. I see this as a direct reflection of life … the good, the bad, and in-between. We experience it all if we are living our lives fully. Mary suggests that the Seeker create a notebook for this deck, and jot down their personal impressions of each card. What I have found through using them is that how I see each card varies on my intention … on what I am using the card for. The cards   can be used on their own for a reading, tghey can be used alongside the Tarot or other tools of divination for added information, they can be used to interpret dreams (I have done this), they can be used as a story board for writing, they can be used to work with past life energy blocks … the uses are limited only by the Seeker’s imagination.

As an example, I choose to do a reading from my own life with these cards. I defined the positions in the following manner:

What strengths can I draw on?  I have the strength to break the bonds that bind me in this situation. The bonds are of my own making … there is life within this issue that has yet to be seen. I need to be willing to live it. 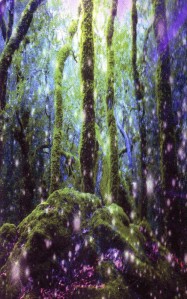 What do I know about this issue? That I will find what I am looking for if I quit looking for it. I need to soften/blur my vision to experience what is there, to see what can be. There is light, and dancing, and music everywhere!

What don’t I know about this issue? That it is important that I let the outcome go to Spirit … that the seeds I have planted are growing.

What is hidden from me about this issue? That time is of the essence. That I need to stay grounded and centered,and that I will find my way. The path is there … I am where I need to be.

What challenges me? Seeing where illusion ends and reality begins. Having the courage to take off my mask, and be who I am .

Note: Proceeds from this deck will help support Attune Magazine.