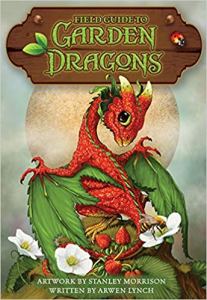 The “Field Guide To Garden Dragons” is a 46 card whimsical fantasy deck that comes with a 135 page companion book. The instructions in the beginning of the book take the reader on a fantasy trip to identify garden dragons in their region, as well as others. Garden Dragons are identified as being members of the kingdom Animalia Mythica, phylum Draconia, class Fablia, and order Draco Occultatum.

It is stated that anyone wishing to see garden dragons must look closely, as they are very good at camouflaging themselves. Very tongue in cheek, the reader is also asked to report any significant differences in how the dragon(s) they encounter from the descriptions given in this book to the Royal Dragon Society, accompanied by field notes and illustrations. BTW – Garden Dragons can be found almost anywhere – including your own back yard!

Each dragon is presented with a black and white scan, the common name, the scientific name, a keyword, appearance, habitat, field notes, and mystical meaning. For instance, the Apple Dragon’s scientific name is Draco Malum Delisquious. It is described as having shiny wings, a lustrous sheen to its scales, and having green accents. Its eyes are able to rotate 360 degrees, and it radiates spines from its brow to the base of its tail. It prefers trees as a habitat. The field notes indicate that when this dragon roars, it sounds like the buzzing of bees. It is easily tamed. The mystical meaning is that of thinking about healthy habits. When this dragon appears in a reading, you are reminded to choose healthy, nutritious snacks. You may also want to add movement to your daily activity.

The cards themselves are 3.4 inches by 5 inches, on a glossy, quality cardstock. The backs are reversible. I really, really appreciated that there are no borders on this deck – the imagery goes clear to each side. The imagery is very gentle and whimsical, with nice use of color. At the bottom of the card the common name of the dragon appears, along with a keyword, in dark coloring against a beige background. 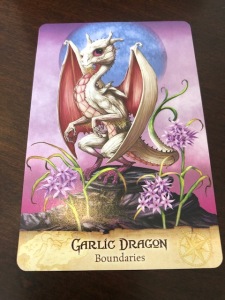 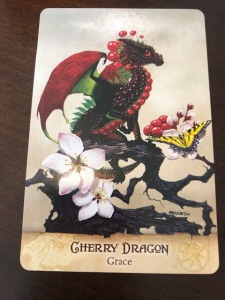 I really felt that I wanted to know these little people, to go out into my yard, and sit and talk to them. For me, they brought a sense of peace. No instructions for reading with them are given in the companion book. They could be used as a daily draw, as a “What do I need to know?”, or as an action card following a reading with other types of cards. How the reader chooses to use them is up to the reader, limited only by their imagination!