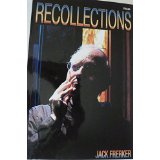 This is the second non-mystery book from Father Jack Frerker, a retired Catholic priest from the Southern Illinois diocese of Belleville. This is a book of fiction, but it reflects the times that covers, both current and past. The story revolves around a retired priest who dictates his memoirs to a younger man in seminary, who becomes a priest himself before the project ends.

The story is both real and surreal – I lived through the times that the retired priest was active in the church. I have my own memories of those times, which brought me to tears more than once while I was reading this story. I am not Catholic (I was brought up in the Congregational church), but we were all a part of the bigger picture of life.

Many of the statements that the retired priest makes in his recollections follow my thoughts exactly. I strongly admired religious leaders of all denominations, and gave them more faith than was perhaps called for. It is of interest to see the retired priest as a young man, finding his way within the church. We see how he becomes aware of the politics, of how things are not always as they may seem.

Each chapter is headed by a short quote from the bible. The story is written with humor at times, especially regarding the diocese housekeepers, and their role in church life. (They had more power than one might think!) It is written with honesty, addressing the very real issue of sexual abuse within the church, and how it was ignored. It talks about the relationships between clergy, and how often many of them had no say in things.

Another important aspect of this story is church finances, and how the clergy, if so inclined, misused church funds. Ego can get in the way of the best of us!

While this is a work of fiction, it reflects very real times. I highly recommend it as a way of broadening ones perspective about the history of the church, and our individual spiritual selves.

© 2015 Bonnie Cehovet
Reproduction prohibited without written consent of the author. 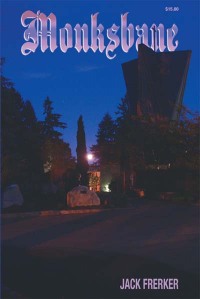 “Monksbane” is the fourth mystery novel in this series, featuring Father John Winterman, a diocesan priest. In this book, Father Winterman is on a retreat at a Benedictine monastery, seriously attempting to come to terms with what he believes to be the “injustice” of God. This relates to things that have happened within his own parish – deaths which he feels did not “need” to happen. He is assisted in his journey of discovery by one of the retired Benedictine monks, Father Peter.

On the first morning of his retreat Father Winterman comes across an elderly Benedictine monk, unconscious on the floor of the walkway between the abbey’s main floor and the church. He calls for help, and the monk is taken to the hospital. The real question … how did this happen? And is someone from within the Benedictine community involved! Brother Robert was an older monk, a former teacher who was now dealing with Alzheimer’s. He was a gentle soul, who choose to speak in very archaic English, which could get on the nerves of his fellow monks –especially the younger one. One more thing – Brother Robert also has a severe allergy to peanuts. Will this be his undoing?

I loved this story, in that it really is a story … actually, it is several stories, intertwined, held together by the mystery surrounding Brother Robert. We read about the Benedictine society, and see a bit of how it functions. We also read about the Oblates of Mary Immaculate, and how their connection with Priest Point Park in Washington State (a state that I have lived in for many years). We see that the generational gap exists in the religious world, just as it does in the secular world. We see the majesty that is the Pacific Northwest, and the place that Saint Martin’s (the Benedictine University) plays in all of this.

This is one of those days when I just want to share links to other people’s work. Enjoy!

From Helen Howell we have a very innovative interview – her decks interview her! (Mr. Napo isquite the interesting gentleman!) I can just see me trying to handle this before my first cup of coffee! http://tarotnotes-majorandminor.blogspot.com/2011/02/my-tarot-deck-interviews-me.html.

For those that enjoy light mysteries, one of my favorite authors, Father Jack Frerker, now has all of his books on Kindle. Go to www.paxpublications.com to both see and hear selections from Father Frerker’s books.

The Royal Mail (or perhaps the U.S. Postal Service, or both in cahoots!) finally delivered the copy of “Tarot Lovers Diary” (Karyn Easton, www.paranormality.com) that was sent last December. (Remember – I have already received the second copy that was sent! My review is here – https://bonniecehovet.wordpress.com/2011/02/04/tarot-lovers-diary/.) Please note: Karyn is sold out for this year, but will be publishing again next year. I am sending my extra copy to Mary Nale – a delightful lady that I met through the Tarot Guild, and someone who has been very helpful to me.

My interview with Robert Swiryn (The Secret of the Tarot) can be seen here – https://bonniecehovet.wordpress.com/2011/02/08/interview-with-robert-swiryn/.

Paul Hughes-Barlow has accepted the position as Tarot editor for “All Things Healing”. Read about him here, and see one of Jordan Hoggard’s incredible videos!
http://www.allthingshealing.com/about-tarot-card-readings.php

See Part 1 of my friend Anna Burroughs Cook’s article on cards that fall out as we shuffle here – http://www.allthingshealing.com/Tarot/What-Falls-To-The-Floor-Comes-To-The-Door-Interpreting-Fallen-Cards-Part-1/7076. See Part 2 of this incredible article here – http://www.allthingshealing.com/Chiropractic-Applied-physiology/What-Falls-To-The-Floor-Comes-To-The-Door–Interpreting-Fallen-Cards-Part-2/7083.

Tooting my own horn a bit, here is my article on the Hermit, from the “Gaian Tarot” –http://www.allthingshealing.com/Chiropractic-Applied-physiology/Take-My-Hand–The-Hermit-/7086 “Take My Hand” The Hermit (Gaian Tarot www.gaiantarot.com).

Have a wonderful weekend, everyone!