“If art serves any purpose other than Simple decoration, it’s to bring into Focus, if only for an instance,

Ciro Marchetti (Gilded Tarot, Tarot of Dreams, Legacy of the Divine Tarot, Gilded Reverie Lenormand) is an artist and a thinker, and someone that I have long admired. He doesn’t just toss decks out there … they are well thought out, and presented in very unique fashions. With “Oracle of Visions” he moves away from the restrictions of the world of Tarot to create an oracle deck that would work in a more flexible manner as a tool of divination and a tool for meditation. Marchetti’s intention was to create a set of images that spoke for themselves … i.e. they would need no supporting text. He has accomplished this … in a very spectacular fashion! The end result is a deck of 52 full color cards, with a 140 page companion book, contained in a sturdy, lift top box. The cover of the box shows the image of card number 26 – Past & Future. The cover for the companion book carries the image of card number 36 – Entrapment/Limitations/Restrictions/Complications. The companion book starts out with a foreword, in which we learn the reasoning behind the creation of this deck, and a bit about its structure. The imagery in this deck is loosely broken down into four categories: Situations, Emotions, Actions, and Behavior. These categories are meant to be flexible enough that each card would be free to serve in many different roles. There are no reversals with this deck … which I really like. (I do not read the Tarot using reversals either.) The images themselves tell the story … either alone, or in combination with other cards. I also like that there really is no common theme in this deck. For those of us that know Marchetti’s work, we are very comfortable with his use of jesters, masks, and mechanical devices, along with faux Victorian costumes and characters. Marchetti notes that the jesters, masks, and theatrical performances serve as archetypes, while masked figures and performers are both anonymous and role playing. The mechanical devices serve as metaphors for our partial control of our own fate. I feel very much at home with this deck!

considerations and responsibilities we have to apply when making them.”

Each card is presented with a black and white scan, keywords for the card, a short quote, and a short xplanation of how the card can be read. For example: Card 4 Perspective Points of View   “I was once like you are now, and I know that it’s not easy to be calm when you’ve found something going on. But take your time, think a lot. Why, think of everything you’ve got. For you will still be here tomorrow, but your dreams may not.” – Lyrics from Father and Son, Cat Stevens There may be no right or wrong. The view is the same, but its perception is different. Fresh ideas and experience sharing the same eyes, but a different vision. Two manifestations of the same person share a commonality: one from the fresh, eager innocence of youth, the other from the calmer, sobering maturity of experience. Both grasp the same mask in unison, their destinies entwined and ultimately inseparable. At some point, both will see the same vision.  At the end of the companion book Marchetti presents two different ways of interpreting the same card, along with instructions for working with card combinations. He also discusses the deck background, symbolic meanings, and his approach to the deck. 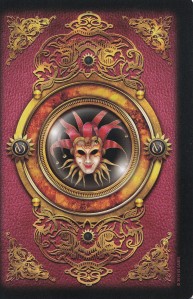 The cards themselves are fairly large – 3 ¾” by 5 ½”, and of sturdy card stock. The card backs show a dark outer border, surrounding gold filigree on a red background. In the center we see the face of a jester. The card faces show a black outer border, with a fine gold inner border. The card number is centered at the top of the card in gold, with Marchetti’s icon centered at the bottom of the card, in gold. There is no text on the card (which, IMHO, makes interpretation easier). The artwork is digital in nature, with a nice depth of color. 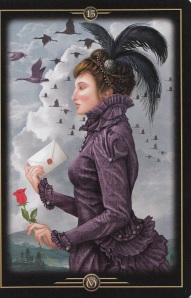 One of my favorite cards is Number 15 (Farewell, Goodbyes, Closure). Here we see a lady in Victorian dress, with dark plumes in her hair. In her right hand she holds an envelope, in her left hand a single red rose. She faces the left hand side of the card. The sky above her is filled with clouds and birds. 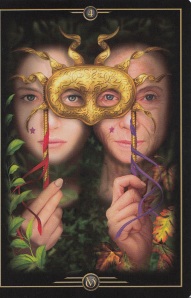 Another favorite is Number 4 (Perspective/Points of View). In this card we see two aspects of one individual (one older, one younger), side by side. They are each holding on to one side of a mask, with the mask held up so that each one has an eye peering through it.

Card number 24 (Letting Go, Offering A Way Out) certainly gives me pause! Here we see a female figure, with a red robe draped over her shoulders.  She is gazing off to the left hand side of the card. A cat peers from her left hand side, while a cage with butterflies in it hangs from the ceiling.

Card Number 31 (Secrecy, Confidentiality) shows a female figure dressed in a lavender dress, standing between two blue curtains, with a lit chandelier behind her. Her hands are held out in front of her, her right hand resting on what appears to be a locked box or book, with her right hand reaching out towards a lit globe sitting on a desk.

Card Number 41 (Identity, Self-Analysis, Knowing Oneself) shows a female figure holding up what looks to be a mask, which is reflected in a triple mirror. On the table in front o her are two masks, and a series of small Russian dolls. 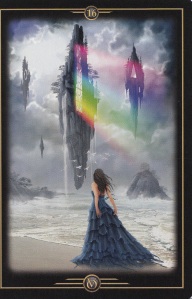 Card Number 16 (Distance, Isolation, Perspective) reminds me of Avalon. We see a female figure, dressed in blue, walking along a shore. She is facing away from us. Floating monoliths appear in front of her. I recommend this deck not only for divination purposes, but for meditation, ritual, and journeying.

Reproduction prohibited without written permission from the author.

If “art” serves any purpose other than

simple decoration, it’s to bring into

focus, if only for an instance, enabling

I have followed Ciro’s progress through several decks (“The Gilded Tarot”, “The Tarot of Dreams”, and “Legacy of the Divine Tarot”), and have been awestruck at the innovative manner in which he presents his material. His “Tarot of Dreams” was the was the very first time that I had seen an interactive CD used in such a manner – I was like a little kid in a candy storet! Ciro was also the first deck creator that I knew of to include such marvelous “extra’s”, such as wall paper, note paper, screen savers and more.

While his previous work has been in the area of traditional Tarot decks, his path has taken another turn here, to that of an Oracle deck. In stepping outside of the strictures of traditional Tarot, he was able to create a tool of empowerment for meditation and divination that was not dependent on text of any kind – the images do the talking. The images then act as visual starting points for intuitive reading. The images themselves were consciously kept neutral, so that the interpretation dependent upon the specifics of the reading. In essence, Ciro terms this a “reality check”.

In using an oracle of this type, we are able to get out of our own way – we move past our shadows and our fears, as well as our (at times) unrealistic expectations. We are better able to consider the ramifications of our decisions and actions, and to accept responsibility for the world that we have created/are creating around us.

Ciro has (loosely) broken down the images in this deck into four categories: Situations, Emotins, Actions and Behavior. He also does not see a need for reversals. Yay! I don’t read with reversals anyway, so this is a high spot in my day! His reasoning is that the potential presented by reversals is contained within the images themselves. This is also my thought, along with the caveat that surrounding cards will define the interpretation. This is also the reason for no keywords, and no titles on the cards. The numbers at the top of the card are simply used as a reference to their description in the companion book. There is no one common theme either. Ciro notes that he is sharing his passion for jesters, masks, mechanical devices and faux Victorian dress and characters. The masked figures in this deck can be a generalization, or representative of a specific individual.

The deck is a 52 card deck, with the cards measuring 3.5” by 5.5”. They have a glossy finish, and that lovely gold edge that I adore! The card backs are red and gold, with a black outer border and a jester in the cener. They are not reversible. The card faces show a black outer border, with a thin gold inner border. The card number is centered on top of the card, and the initials “O V” (Oracle of Visions) centered on the bottom. The artwork in richly colored, along the lines of whimsical fantasy.

The book, deck and CD are packaged in a heavy duty cardboard box that will withstand both storage and handling. The 80 page book begins with an introduction by Ciro, followed by a presentation on each card that includes a full color image of the card, a short quote, Ciro’s personal description and meanings, with opposing suggestions in places.

For example, Card 1 grabbed me immediately, at a time when I was extremely stressed. I loved the card, even though I had no clue how Ciro envisioned it. Looking in the companion book, I saw “A New Beginning – A Release From the Past”. Yahoo! Spot on! The quote for this card is “Yoy may have a fresh start any moment you choose, for this thing we call “failure” is not the falling down, but the staying down. “ ~ Unknown.

Ciro’s notes for this card include the idea that in moving on from failure we make the choice to leave the past behind. On the floor, or bottom of this image are three discarded cards – each a Fool from his three previous Tarot decks. From the bix their spirits are released as three doves, representing new beginnings. There is also a note to be sure that the time is right to move on.

At the end of the book is a short section on interpreting this oracle. Probably the biggest suggestion is that this deck is intended to be as flexible as possible. As an example, he uses card number 1 and interprets it in two different ways. This is followed by an example of several cards read together.

The final chapter of the companion book discusses the background for the “Oracle of Visions”, and the journey (through three Tarot decks) taken to bring it about. It was a learning curve, and this is the end product. He talks about the changes that we see in Tarot from country to country, and from printer to printer, as well as the beliefs of the various decks creators. Then there is the inconsistency in symbolic meaning from deck to deck.

The CD that accompanies this deck/book set includes the extra’s, the “added value” that Ciro is famous for. In this instance, we are gifted with screensavers (Mac and Windows), wallpapers, avatars (Woo Hoo!), and a very engaging  puzzle. One more thing … A thoughts and notes booklet, in PDF format, is downloadable from Ciro’s site!

I found it very easy to relae to and read with this deck. It can be used to augment a Tarot reading, or as a stand alone oracle. No previous knowledge is necessary. Have fun with this!